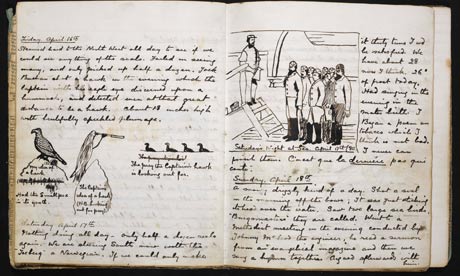 The journal detailing Arthur Conan Doyle‘s experiences as a ship’s surgeon on the Arctic whaler The Hope has been unavailable to the public since he wrote it more than a century ago. Penned in 1880, when the writer was just 20, Dangerous Work: Diary of an Arctic Adventure will be printed as a facsimile edition by the British Library showing Conan Doyle’s original handwriting and sketches, alongside a full transcription and photos of the journey.

“I fell into the Arctic Ocean three times today, but luckily someone was always near to pull me out,” Doyle wrote on Sunday, 4th April 1880. “The danger in falling in is that with a heavy swell on as there is now, you may be cut in two pretty well by two pieces of ice coming together and nipping you. I got several drags, but was laid up in the evening as all my clothes were in the engine room drying … after skinning a seal today I walked away with the two hind flippers in my hand, leaving my mittens on the ice.”

As reported by the Guardian, the experiences of the voyage, including the brutal slaughter of the seals, would give him material for life. He described the young seals as making a noise “between the mew of a cat and the bleat of a lamb”, and on 3 April 1880 wrote: “It is bloody work dashing out the poor little beggars brains while they look up with their big dark eyes into your face. We picked the boats up soon and started packing, that’s to say all hands getting over the ship’s side and jumping along from floating piece to piece, killing all they can see, while the ship steams after and picks up the skins … I was ambitious to start but in getting over the ship’s side I fell in between two pieces of ice and was hauled out by a boathook.” Most of his medical work onboard was patching sailors up after falls, but some of it was traumatic. The oldest member of the crew died in his arms, of peritonitis not helped by a last meal of plum duff. “Poor old man. They were very kind to him forwards during his illness, and certainly I did my best for him. Made a list of his effects in the evening. Rather a picturesque scene with the corpse and the lanterns and the wild faces around.”

As reported by the Bookseller today, Conan Doyle biographers Jon Lellenberg and Daniel Starshower co-edited the new facsimile volume, and have included several pieces of Conan Doyle’s related work, including a Holmes story, and magazine pieces.

Lellenberg said: “In this diary’s entries, we see the young medical student step outside the classroom into settings of high adventure and great peril, finding his way among hard men whose skill and daring he came to respect greatly, and at the end of the voyage encountering a direct link to the first tale about Sherlock Holmes that he would write six years later.”

The book will be published on 26th September this year, priced at £25.