Looking over the last week…

Spoilers from JK Rowling’s upcoming novel are released, a guide of London from NW by Zadie Smith is printed, new life is breathed into Moby Dick with the help of well-known celebrities, a new biography exposes John Keats as an opium addict and Stephen King reveals the publication date for his sequel to The Shining.

This is all too much news for one blog post, so let’s focus on the first piece of literary fact. 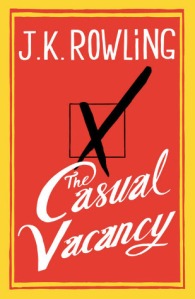 According to the Guardian, JK Rowling’s first novel for adults, The Casual Vacancy, draws on her own experience of living on the margins of society and satirises a political landscape in which the poor are regularly cast “as this homogeneous mash, like porridge.”

The idea for the novel, her first since the Harry Potter series that made her the world’s first author to become a billionaire solely through her writing, came to her on an aeroplane. “I thought: local election! And I just knew. I had that totally physical response you get to an idea that you know will work. It’s a rush of adrenaline, it’s chemical. I had it with Harry Potter and I had it with this.”

Set in the fictional West Country village of Pagford, which bears a passing resemblance to Rowling’s own childhood home in the Forest of Dean, and telling the story of a parish election triggered by the death of councillor Barry Fairbrother, The Casual Vacancy investigates the agendas and infighting that fuel local politics, and the class divisions that rive even the most picturesque English communities.

The election ultimately turns on the fate of Pagford’s grotty council estate, the Fields, embodied in The Casual Vacancy by the wretched, wrung-out Weedon family: mother Terri, struggling to kick her drug addiction, three-year-old son Robbie, under threat of social care, and teenage daughter Krystal.

“So many people, certainly people who sit around the cabinet table, say: ‘Well, it worked for me’ or ‘This is how my father managed it’,” Rowling said. “The idea that other people might have had such a different life experience that their choices and beliefs and behaviours would be completely different … seems to escape a lot of otherwise intelligent people. The poor are discussed as this homogeneous mash, like porridge … They talk about feckless teenage mothers looking for a council flat. Well, how tragic is it that that’s what someone regards as the height of security or safety?”

The stratospheric success of the Harry Potter franchise has placed her in the enviable position of being able to do “whatever the hell I like”, she said. “I am the freest author in the world. My bills are paid – we all know I can pay my bills – I was under contract to no one, and the feeling of having all of these characters in my head and knowing that no one else knew a damned thing about them was amazing … Pagford was mine, just mine, for five years. I wrote this novel as exactly what I wanted to write.”

The Casual Vacancy is released this Thursday. To see a (rare) interview with JK Rowling, click here.